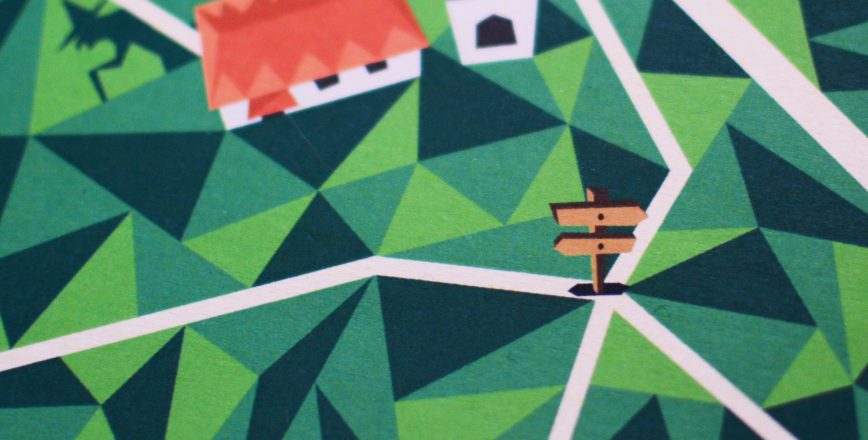 At the crossroads of publishing #getgamedone 003

By Maxim Weinstein in #getgamedone on November 17th, 2017

To be or not to be a self-publisher? That is the question that even Shakespeare would probably find hard to answer.
Though the board game convention in Essen gave me a broad spectrum of possibilities, it also showed me strengths and weaknesses of each of the publishing paths. It’s never black and white.
As if it ever was?! Great! And what now?
So, in order to understand which way to go I took all the insights I received and experience I gathered from other creative businesses and summarized them in seven factors that in my opinion determine the publishing process. 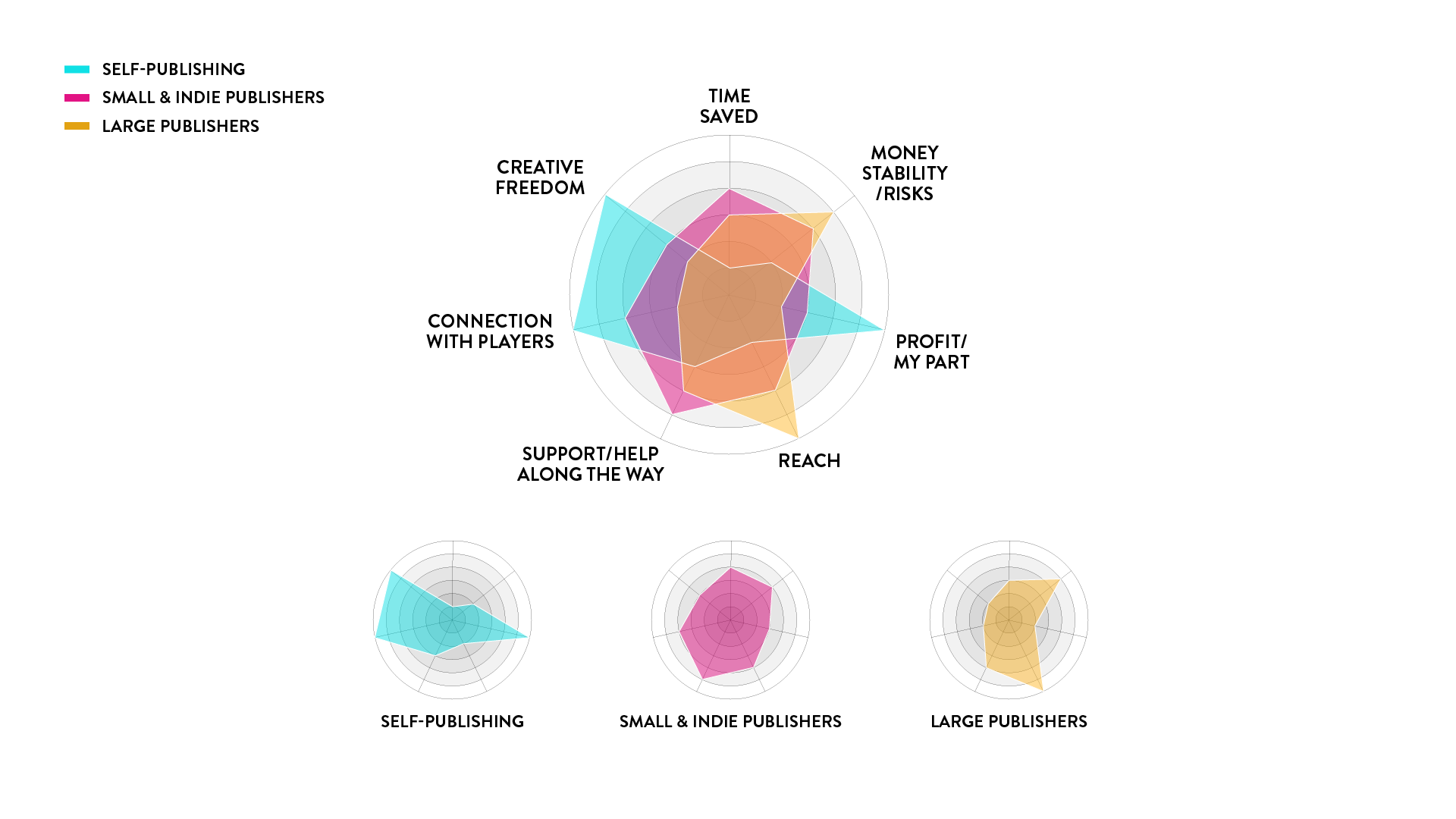 I compared three directions – self-publishing (using the example of Kickstarter), small/indie publishers, big publishers – within these factors.
Not all aspects are equal for me, but each one of them is in some way crucial and can be a “game changer”.
Creative freedom – As a creator of the game you have a clear view on how your game should look and feel like. In case of Grimmonia the visual language is rather special, so not every publisher would be ready to publish it that way. In the same time I am not ready to give up on artwork, because I still believe that abstract style would help trigger the phantasy of players. Regarding to materials used in the game, apart from cardboard and paper the original prototype required wood for figures and metal mechanisms for spin top. To make it acceptable for publishers I would have to optimize/simplify this. The huge benefit of a kickstarter are so called stretch goals – with increase of a budget you can add /expand elements of the game. So this could be a solution to integrate different materials. All in all, the kickstarter is design-friendly platform, where users are more likely to buy something special.
Time saved – each way is time consuming, but starting a kickstarter campaign is a science of its own where the author has to plan approx. 6 months of concentrated work for setting up and executing the project.
Money stability/Risks – chance of losing it all is pretty big with kickstarter. only 37% of games were successfully funded in 2016 on the platform. If the renowned publisher on the other hand gives a final „yes“ to your game, the chance is pretty big they would get it done.
Profit/My part – Taking care of the production and distribution has its cost. In the big publishing houses the author gets about 3-5% from the distributor’s price of a game. In the kickstarter project you are your own financial director. You are in charge of making the campaign profitable.
Reach – this one is controversial, because though big companies have broader distribution channels, it is less profitable for them to invest in marketing of a game with unknown potential than of a bestseller. Based on my brief encounters with game authors I got a feeling that smaller publishers are more likely to take risks on young authors. In case of kicktrarter I have to bring around the half of backers with me and could not rely solely on the community of the platform.
Support-Help along the production way – For the first game being published (hopefully), getting the help for it is very important. Sure I’m already receiving huge support from other kickstarter authors, still no one would bring me through the jungles of production process on the self publishing path. On the other hand I got the impression that if a small publisher likes your Idea, they would fight for it.
Connection with players – it’s easy to underestimate the importance of a feedback, especially for a game with improvement potential. Due to a personal approach of a kickstarter, here you can directly communicate with players who backed your game for changes and improvements.
To sum up, I feel that both indie publishers and self publishing with all their pros and cons are possible ways for me to go. Self-publishing resonates with me according to a lot of freedom and decision making, small publishers are less time-consuming (considering you found one) and could provide more help along the unknown way.
There are still steps I have to accomplish regardless of the decision and by boing it I would further gather contacts and knowledge. 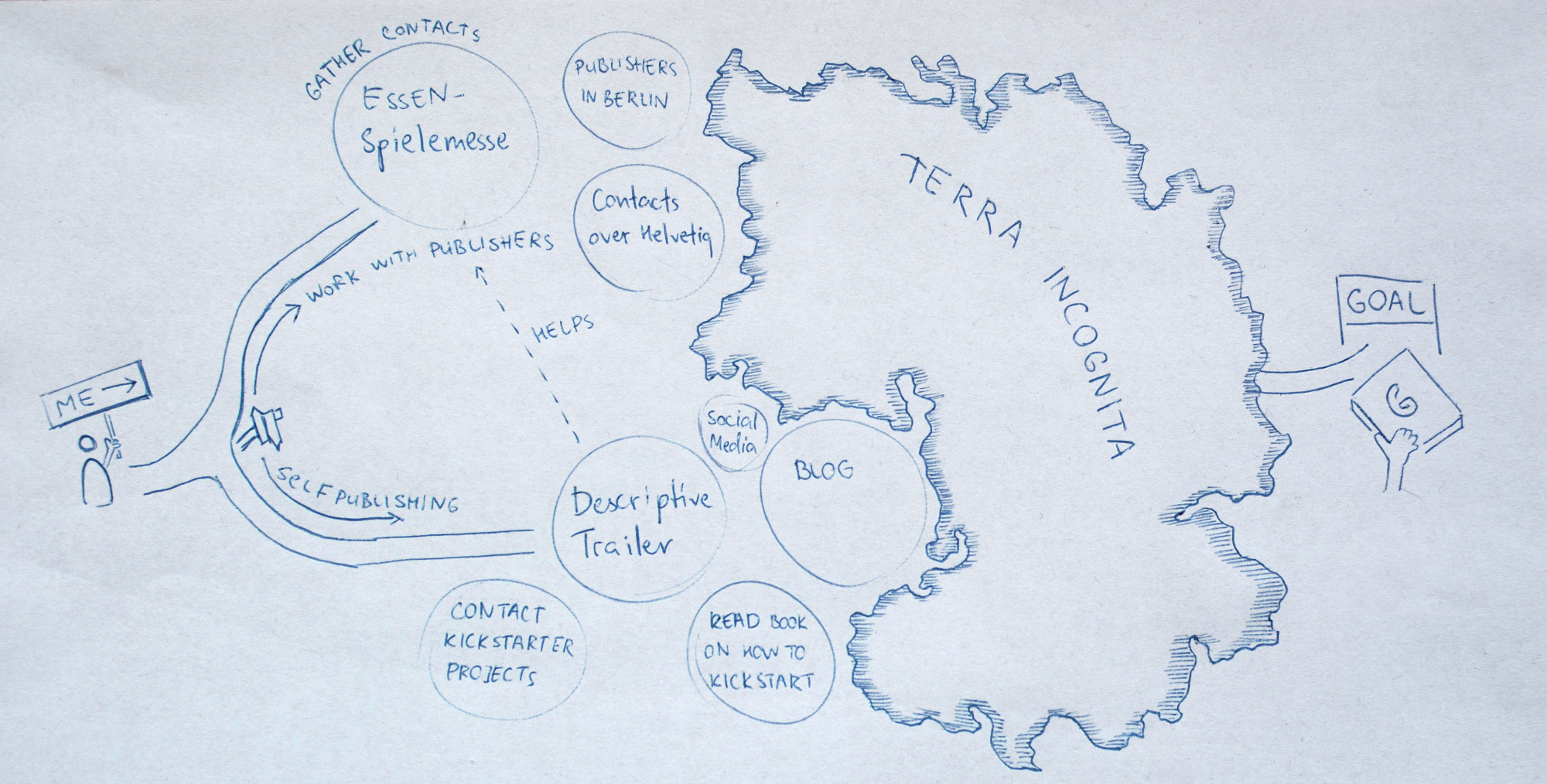 Did I forget some important aspect? Feel free to point it out to me.
Best